(Stuttgart/Tübingen) – Dr Michael Burnet is an entrepreneur, managing director, researcher and inventor who has already set five businesses on a promising course. His work with Synovo GmbH, a pharmaceutical research company based in Tübingen, Germany, includes developing treatments for inflammation of the lungs, which is partly what makes COVID-19 so dangerous. Through his involvement in Qualizyme Diagnostics GmbH & Co KG in Graz, Austria, he is manufacturing a successful early-warning system for wound infections. Besides his research and business activities, Burnet has also invented kitchen accessories and furniture. Synovo’s new corporate headquarters is to be opened in August, giving the company ample space for high-tech research – and a lathe.

Dripping milk jugs can be a real pain – particularly when in a meeting with an important client. “The fat content of milk gives it a different surface tension to water, tea and coffee, but I have designed a Teflon jug that is nonetheless absolutely drip-free,” explains the doctor of biochemistry as he briskly pours his milk – without spilling a drop, of course. It is typical of Dr Michael Burnett that, instead of just complaining about an irritating problem, he sets about finding a solution. Whether drinking coffee or working in medicine, his approach is the same.

His company Synovo works for customers in the pharmaceutical industry, carrying out research on projects aimed at optimising anti-inflammatory and immuno-suppressive drugs. “We make our money by finding solutions for the early phases of pharmaceutical research,” explains Burnet. To date, the 53-year-old has founded five companies, “two of which have achieved long-term profitability,” he points out. The other company besides Synovo is Qualizyme, which is based in the Austrian city of Graz and develops wound diagnostics. “When a wound is not healing, there is a reason for that, but the diagnostics in this area are still very basic. Our product can identify that the body’s immune response has been triggered and that an infection is likely.” Qualizyme is led by two young female scientists and, as a winner of the Phönix Gründerpreis entrepreneurship award, is one of Austria’s most promising medtech startups. 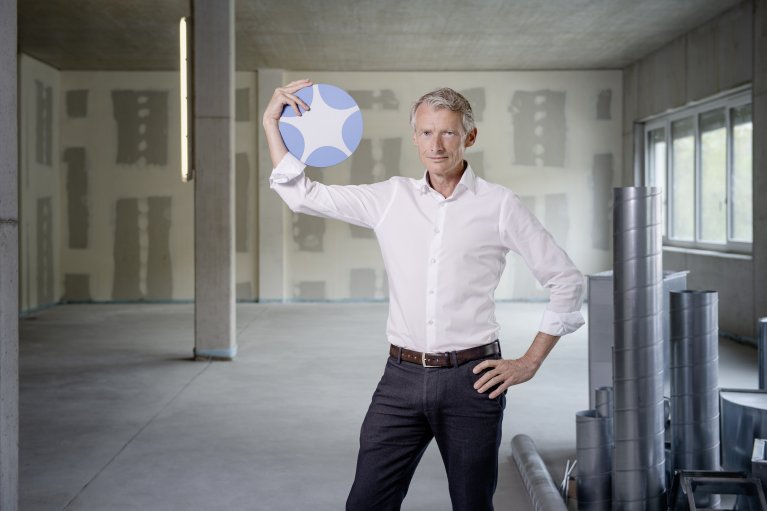 “From the very start, I have tried not to be dependent on donors, and although we are involved in EU projects and projects funded by the German Federal Ministry of Education and Research (BMBF), these only account for around 7 percent of our turnover.” You could say that Burnet is looking for the perfect milk jug in the health industry, too. “The trick is to get state-of-the-art products onto the market faster, as that makes them cheaper, too. Generally speaking, ‘value-based pricing’ – when reimbursement prices are directly related to a product’s benefits – can really help biotech companies if it leads to sales at an earlier stage.” He points out that Germany could lead the way in this area, and is particularly enthusiastic about the situation in Australia: “If someone there makes a clinical development, the state covers 43 percent of the costs. That ensures early access to new treatments and encourages a very active research sector.” He views research and development as existentially important: “Having an aptitude for invention is hugely important and many inventions come from very normal people in small businesses. All you need to get started is a good head on your shoulders – and then an environment where the development is financed.” 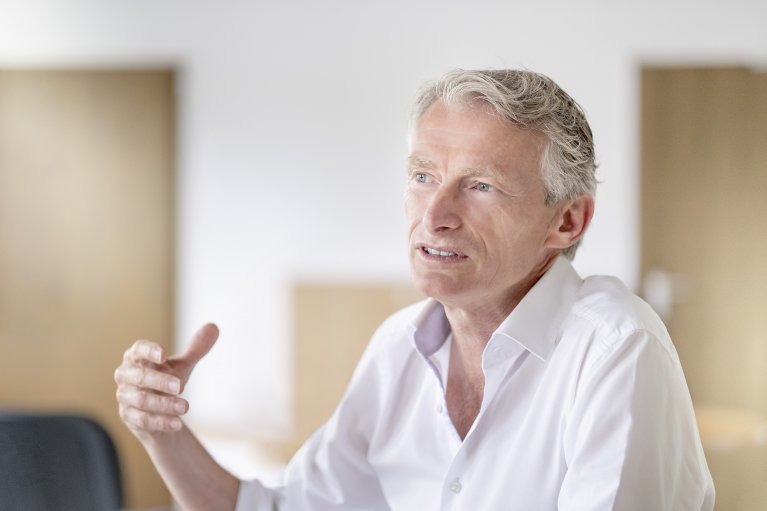 A global citizen who considers himself European

Burnet’s pursuit of knowledge is something of a family tradition – one that is even recorded in the annals of Wikipedia. In 1960, his grandfather, Sir Frank Macfarlane Burnet, won the Nobel Prize for Medicine with Peter Brian Medawar for predicting acquired immune tolerance. His father was involved as an economist in researching the disease known as Kuru in Papua New Guinea. This prion disease, which was only identified in Germany when BSE arrived, spread like an epidemic through the indigenous Fore people in the 20th century. It was caused by endocannibalism, that is, the funerary practice of eating the flesh of deceased tribe members.

Michael grew up in Papua New Guinea, spoke only New Guinea Pidgin during his early years and learned that a country’s prosperity has a lot to do with the health of its people. To avoid competing with his famous grandfather, he initially decided to study agricultural sciences before going on to become a biochemist. “I deliberately chose something other than medicine and I’m still to this day surprised that I ended up in the pharmaceutical and medical sectors.” Burnet studied in Australia and then moved to Canada, the USA, France and the UK. He speaks Italian, French, German and, of course, English. “I was once in a meeting with three people – one from Switzerland, one from Swabia (the cultural region in which Tübingen is located) and one from Berlin – and I got the impression I was the only person there who understood everything.” He is a citizen of the world, considers himself European and through Synovo, which he founded in 2004, has put down deep roots at three company sites in Tübingen. He is currently in the process of building a new company headquarters at his own financial risk. The site will feature 100 workplaces, primarily for his staff of 52, but also for other companies, since a proportion of the high-end laboratory facilities will initially be hired out. The site is due to open in August 2021, with the scale of the celebrations to be dictated largely by the pandemic status at the time.

The development of numerous research projects in Graz and Tübingen is also directly linked to the pandemic. Alongside its early-warning system for wound infections, Qualizyme is now also developing rapid tests for COVID-19 infections. Unlike conventional tests, this system is not based on detecting RNA or antibodies, but rather particles of the virus itself. For its part, the team at Synovo has been researching innovative treatments for lung inflammation for many years. “Through our study, we have been able to prove that our active ingredient SYD015 works for ARDS (Acute Respiratory Distress Syndrome). COVID could be considered a special type of ARDS.” SYD015 is an immunomodulator that supports the body’s immune response to the virus while also preventing or suppressing excessive immune responses that damage tissues. Synovo is also developing tests for antibody detection against SARS-CoV-2-related proteins and processes that, among other things, can help gauge the effectiveness of vaccine response. 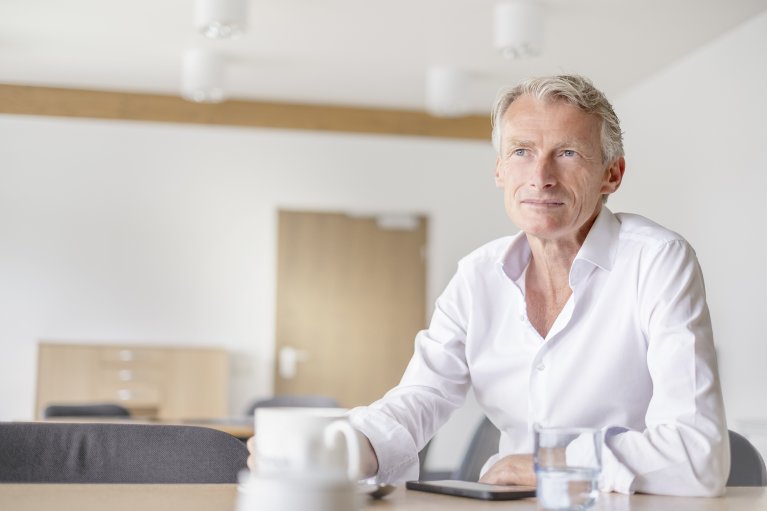 Immunomodulators as a solution

Lung inflammation, wound infection, cancer, Alzheimer’s – all the issues that Burnet is working on have something in common: “From oncology to ophthalmology, I basically see the issues as infections and their long-term effects on our organs. Even if they are different diseases, it all comes down to stimulating or suppressing the immune response. In immunotherapy for cancer, we want to stimulate the immune system. Crohn’s disease and asthma are examples of instances when the immune response is too active and needs to be suppressed. Our solutions are immunomodulators.” To get to grips with these, Burnet doesn’t just have to understand English and the distinctive Swabian dialect – he also has to know what the respective specialists are talking about. “I always try to immerse myself in the specialism so I speak their language,” he explains.

As a passionate runner – “my 10k time is five minutes faster now than it was 15 years ago” – Burnet needs stamina and determination to reach his goals. Communication and teamwork are extremely important to him, too, and he has been involved in the STERN BioRegion since the very start. “Having a functioning network is indispensable in this sector. The cluster we have here is only successful as part of something bigger that offers a supportive environment.” Burnet is confident about the future: “In 15 years’ time, biotechnology in Tübingen could become the Palo Alto or Cupertino of life sciences. We need to seize that opportunity now!”

At the moment, besides everything else he is working on, Burnet is looking into how Tübingen city centre could be made more sociable again during the pandemic, while staying safe at the same time. The entrepreneur has joined forces with partners in the city to develop concepts that will help make Tübingen’s economy more COVID-compatible in the future. For example, he has designed a special table for outdoor dining and built the prototype himself, arguing that “no company is complete without a lathe.” There is no doubt he will carry on working at it alongside microscopes and PCR machines: “You need to have an aptitude for invention. I really believe you can use your own head and hands to create something new and better.” In his case, that is certainly not going to be limited to a milk jug.

When publishing, please ensure that the copyright is correctly stated.