During the Science2Start award ceremony held at the BioRegio STERN 2018 summer party, four teams of scientists and entrepreneurs were honoured for their ideas, all of which boast enormous economic potential. First place was awarded to Professor Bernhard Hirt from the University Hospital Tübingen′s Institute of Clinical Anatomy and Cell Analysis for his idea of the formaldehyde substitute ‟aminolipin‟. Second place went to a software solution for genetically analysing bacterial strains to effectively combat multiresistant bacteria. Tying in third place were two lab-on-a-chip test systems for developing medication to treat neurodegenerative and retinal diseases. The Reutlingen-based artist Jenny Winter-Stojanovic wowed a long list of guests from the worlds of science, business and politics with a spectacular live installation created with cling film in the Tübingen observatory.

Last Thursday, the 2018 winners of the tenth “Science2Start” ideas competition were announced at this year’s joint summer reception held at the Tübingen observatory. The event was organised by BioRegio STERN Management GmbH, the Verein zur Förderung der Biotechnologie und Medizintechnik e. V. (Society for the Promotion of Biotechnology and Medical Technology) and Tübingen-Reutlingen Technology Park (TTR). In his keynote speech on leadership, Dr. Peter Heinrich – serial entrepreneur, founder of Medigene AG, and co-founder and spokesman for the Executive Board of BIO Deutschland – quoted the poet and author Antoine de Saint-Exupéry: “If you want to build a ship, don't drum up the men to gather wood, divide the work and give orders. Instead, teach them to yearn for the vast and endless sea.” Giving some advice to the future entrepreneurs, Dr. Heinrich then said: “The trick to leadership lies, among other things, in creating an atmosphere and the necessary conditions to motivate people to work together towards goals.”

Although the four winners of the tenth ideas competition are just starting out in the world of business, the specialist panel of Science2Start judges viewed their projects as boasting great economic potential. Leading the way was Professor Bernhard Hirt from the University Hospital Tübingen’s Institute of Clinical Anatomy and Cell Analysis with his idea of the formaldehyde substitute “aminolipin”. Second place was awarded to Dr. Wei Ding and Benjamin Buchfink from the Max Planck Institute for Developmental Biology in Tübingen for their “PanX+” software, which is designed to genetically analyse bacterial strains and thus effectively combat multiresistant bacteria. The Natural and Medical Sciences Institute (NMI) at Tübingen University and the Fraunhofer Institute for Interfacial Engineering and Biotechnology (IGB) from Stuttgart tied in third place with their lab-on-a-chip test systems for developing medication. The “3D in vitro platform” developed by Dr. Paolo Cesare targets neurodegenerative diseases, while the “retina-on-a-chip” presented by Dr. Christopher Probst focuses on treating retinal diseases. The prize money awarded totalled 4,500 euros and, as in previous years, was donated by Voelker & Partner, a firm of lawyers, tax consultants and auditors.

At the subsequent summer reception organised by BioRegio STERN Management GmbH, numerous researchers, entrepreneurs and politicians discussed various exciting topics until late into the evening. One topic of conversation was Jenny Winter-Stojanovic – the Reutlingen-based artist gave guests a live performance, producing a sculpture with cling film that, in combination with the lighting, created a sensational membrane structure stretching from around the iron pavilion into the Tübingen observatory. Hosting the event, BioRegio STERN’s Managing Director Dr. Klaus Eichenberg was delighted to see the art installation give guests food for thought. “Entrepreneurs need to have inspiring ideas and implement them creatively if they want scientific ideas to result in success. They need good connections, too. We are able to help in this respect – by hosting this event, for example,” said Dr. Eichenberg.

Descriptions of winning projects from the 2018 Science2Start ideas competition

1st place: “Aminolipin” developed by Prof. Bernhard Hirt from the Institute of Clinical Anatomy and Cell Analysis at Tübingen University
The team of the Institute of Clinical Anatomy and Cell Analysis has developed the substance Aminolipin as a fixing and preservation agent for solid specimens, organs and tissue. It inhibits enzymes that are responsible for decomposition, exhibits a wide antimicrobial efficacy spectrum and is highly efficient in halting the process of putrefaction. Until now, medical professionals have used the toxic and carcinogenic substance formaldehyde to preserve biological tissue, and even entire human bodies. Corpses prepared with Aminolipin closely resemble live patients in form, colour and look and therefore help to enhance doctors’ training.

2nd place: “PanX+” developed by Dr. Wei Ding and Benjamin Buchfink, Max Planck Institute for Developmental Biology, Tübingen
PanX+ is an interactive software solution for analysing and visualising bacteria genomes to fight off multiresistant bacteria. Dr. Ding developed panX software to quickly evaluate and interactively visualize the pangenome – in other words, the entire gene set of bacteria strains. His team, known as PathoVis, has developed the new PanX+ software, which makes it possible to analyse enormous volumes of data in less than a day. The epidemiological data is visualised, which allows researchers to investigate the causes of bacteria and give hospitals and public health authorities recommendations on how to prevent multiresistant bacteria from spreading further.

3rd place: “3D in vitro platform” developed by Dr. Paolo Cesare, Natural and Medical Sciences Institute (NMI) at Tübingen University
Dr. Paolo Cesare’s team has produced an innovative brain-on-a-chip platform and managed to substantially develop Cesare’s MEAFLUIT system of microelectrode arrays fitted with microfluid technology, which secured them a Science2Start award back in 2015. The test system can be used to cultivate and interconnect human neurons. In this way, the 3D in vitro platform makes it easier to develop effective medication for Alzheimer’s and Parkinson’s disease, for example, and circumvents the need for animal testing.

3rd place: “Retina-on-a-chip” developed by Dr. Christopher Probst, Fraunhofer IGB, Stuttgart
„“Retina-on-a-chip“ is an innovative 3D in vitro test system. Researchers from the Fraunhofer Institute for Interfacial Engineering and Biotechnology (IGB) and Eberhard Karls University of Tübingen have succeeded in simulating the human retina in vitro to enable scientists to undertake more efficient pharmacological drug research for treating as yet incurable retinal diseases such as age-related macular degeneration and retinitis pigmentosa. Compared to current testing methods, the 3D retina model and the vasculature-like perfusion of nutrients gives researchers a much better insight into their object of study. The use of pluripotent stem cells as the raw material also helps to reduce the number of tests carried out on animals in pre-clinical drug research and testing. 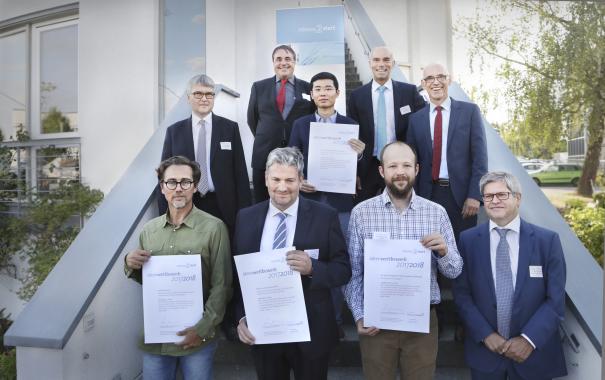 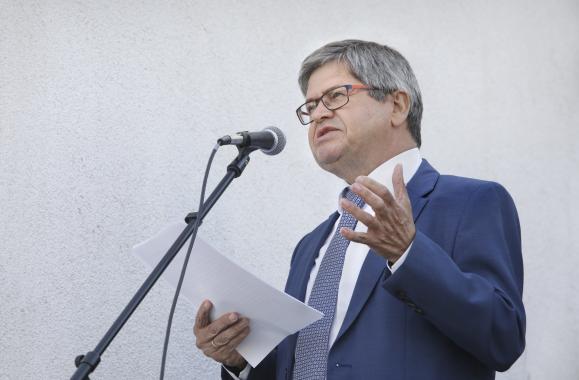 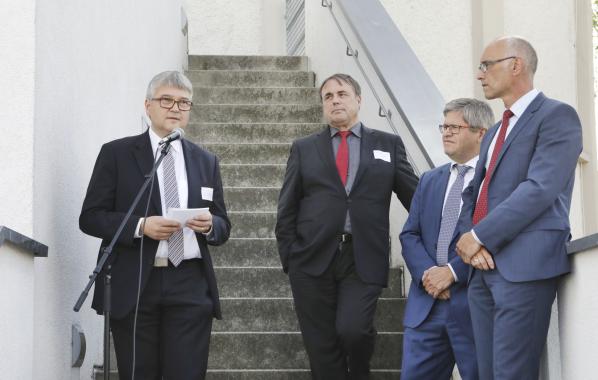 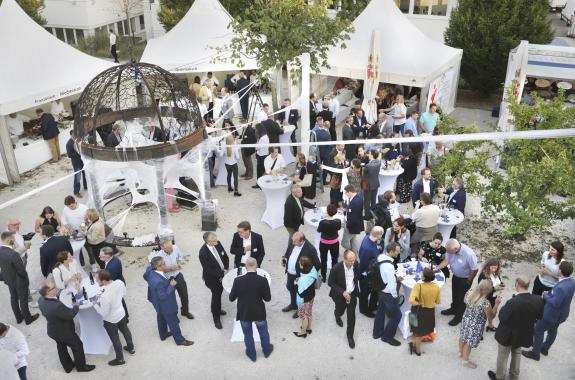 Skilfully networking between science and business - the live installation of Jenny Winter-Stojanovic was one topic of conversation. 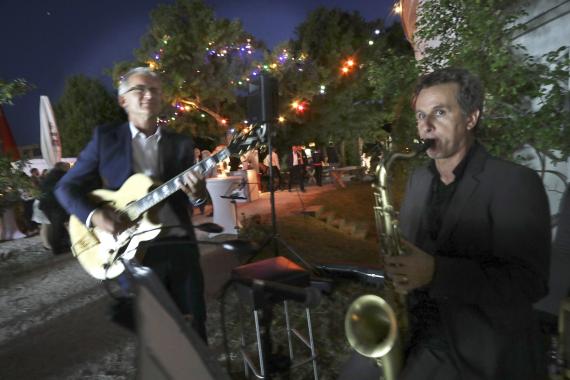 Numerous guests from research, business and politics enjoyed the discussions into the late evening.