Moose and unicorns in Tübingen

(Stuttgart/Tübingen) – Dr. Harpreet Singh is co-founder and Managing Director of Immatics Biotechnologies GmbH. The company, which has its headquarters in Tübingen, specialises in developing and producing T-cell-based immunotherapies to treat cancer. The company currently has around 400 employees across its three sites – there are now sites in Munich and Houston, Texas, in addition to the main site in Tübingen – with the majority of its staff working in Tübingen. Following its successful IPO on the Nasdaq technology exchange in 2020, a contract valued in the billions was recently announced with US pharmaceutical company Bristol Myers Squibb. Ever since Singh co-founded the company more than 20 years ago, he has been tireless in his quest to develop an effective weapon to fight cancer – and the latest news and studies produced by the company suggest that he is getting closer and closer to achieving his aim. 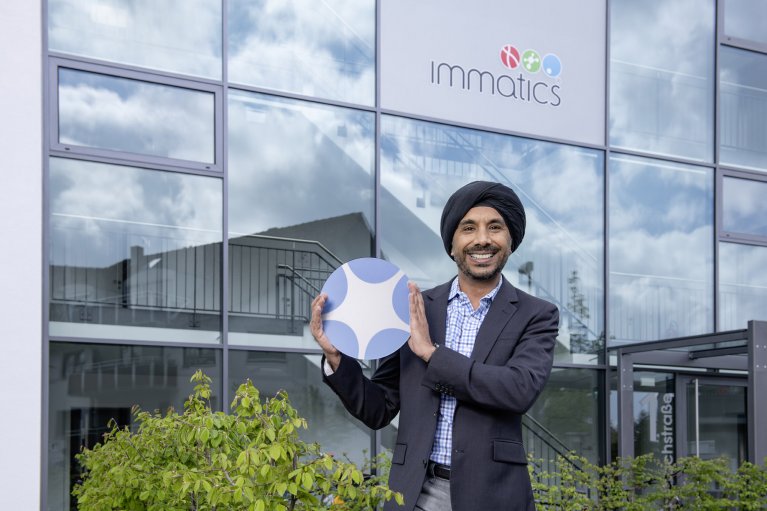 While it wasn’t exactly the drink talking, it is possible that alcohol had a part to play in the idea that led to the setting up of the company in Tübingen, given that Harpreet Singh and Niels Emmerich were sitting in the Liquid Kelter bar in Tübingen when it came to them. “We certainly came up with the name over a Boston Sour,” Singh recalls. The classic cocktail, made of bourbon, lemon juice, sugar syrup and an egg white, helped Immatics see the light of day. In their start-up company, the two PhD students began producing bioreagents and selling them to research institutes in the year 2000. At that time, nobody would have predicted that the company would be working on a cancer treatment in the future. After all, Singh – a young, 26-year-old entrepreneur at the time – did not spend all his time studying in the lab. In 1997, for example, he and the future mayor of Tübingen organised a strike at the university. This was to be the start of a friendship that is still going strong today. “Boris Palmer recognised the importance of biotechnology for this location at a very early stage and really advocated for it,” Singh explains.

In the year 2000, Immatics was one of the first companies to rent premises in the new Tübingen-Reutlingen technology park and move in. As Singh recalls, the start-up spent those early years braving the sector’s “nuclear winter”. “We got through it thanks to a combination of good luck and meeting the right people – such as Dietmar Hopp, who is still the company’s biggest shareholder today and always believed in us, even when times were hard. Another example is the Strüngmann brothers, who have had shares in Immatics for more than ten years. Without these people, the biotechnology sector in Germany simply wouldn’t exist today.”

Just like a perfect Boston Sour, it all comes down to the correct recipe in the case of companies, too – the right people in the right place. Looking back to his days as a biochemistry student in Tübingen, Singh believes that meeting Prof. Hans-Georg Rammensee was a huge stroke of luck. Prof. Rammensee was – and still is – Head of the Department of Immunology within the Interfaculty Institute for Cell Biology at the University of Tübingen. Prof. Rammensee, an exceptional research scientist, was Singh’s PhD supervisor – but that’s not all. “Immatics was founded on the basis of his work – he is part of the story of the company’s origins. He essentially created the foundations for modern T-cell-based immunotherapy. The basic principle involves a T cell – a type of white blood cell – attaching itself to a target structure on the surface of a tumour cell. This target structure is a peptide, which is embedded in something called an HLA molecule,” Singh explains. He then goes on to shed light on something that is no doubt clear to experts, but not at all obvious to the rest of us – namely why there are so many images of moose in the Immatics offices and the Department of Immunology at the University of Tübingen. “There are similarities between the structure of an HLA molecule and a moose’s head, which is why the HLA immunologists in Tübingen have adopted the moose as their mascot.”

The body police get to work!
Toni Weinschenk, another co-founder and a member of the Immatics Senior Leadership Team, has taken this knowledge produced by the University of Tübingen and developed it further. He has created a technology platform that can be used to help identify the target structures present on a tumour. T cells normally attach themselves to the target structures with the aid of T-cell receptors, and this is how
they fight the cancer. The immune system has sometimes “forgotten” to detect these target structures, but the Immatics technology enables it to recognise and fight them again. Singh has been fascinated by this topic ever since childhood. At seven years of age, he believed this was a job for the “body police”. “I remember lying in bed as a child with an infection and a high temperature. My mother explained to me that the body police were dealing with things in my blood and I was captivated by this idea,” recalls Singh, who now has two sons of his own. “We’re now using these police officers in oncology by applying gene therapy to equip them with a receptor. With the help of this ‘weapon’, we can now identify tumour cells very specifically and fight them.”

What’s more, Immatics has now performed its first clinical trials involving patients and demonstrated that this approach doesn't only work in the lab. “In half of the patients, we saw the tumours really start to shrink within just a few days,” Singh comments. “These were patients who had already received many previous treatments – but no treatment was working for them any more. However, enormous tumours shrank within just a few weeks. I’ve spent decades working to try and find an effective treatment for cancer, so these results are phenomenal.” Singh is already looking ahead once more. The next step is to ascertain whether this is a lasting effect and, if so, how long it lasts, thereby providing a long-term medical benefit for cancer patients.

No sneaking off to the lab
“For decades, I’ve been motivated by trying to find an effective weapon to fight cancer, and that’s what I focus on.” On the rare occasions this father of two is not engaged in his work, he’s happiest relaxing at home. “I used to go paragliding, but now I’m happy when I get the chance to teach my sons to ski.” For family reasons, he lives in Munich, where the company has one of its additional sites (the other being in Houston in Texas). As a result, he spends a lot of time travelling. For many years now, the entrepreneur has spent more time in offices than in the research lab – and he really misses his work in the lab. “Ten years ago, I found it really difficult to let the research go, so I would sneak off to the lab at night. Now, though, I focus on working together with our fantastic team to drive the company forward.” He believes that his biggest strength is communication. “I’m pretty good at explaining complex research in
a way that’s easy to understand. This is important, not just in interviews, but also when speaking to investors.”

Investors have always been – and continue to be – hugely important for biotech companies such as Immatics, because it usually takes decades before these businesses are in a position to market products that actually earn them money. Dietmar Hopp, for example, holds a stake of around 26 percent in Immatics through his Heidelberg-based investment company dievini, making him the largest single shareholder. Following the successful initial public offering on the Nasdaq in 2020, a contract valued in the billions was recently announced with US pharmaceutical company Bristol Myers Squibb. The reaction on the stock exchange to this top deal was a jump in the share price. Things are therefore going well for Immatics, despite the company having suffered the odd set-back over the years of its existence. Start-ups with a market valuation over a billion US dollars are known as “unicorns” in the industry. Singh isn’t worried about whether or not unicorns would get on well with the moose in the Immatics headquarters in Tübingen: “All stock markets are seeing surges at the moment, and that doesn’t necessarily have anything to do with our performance. Short-term fluctuations in either direction are irrelevant to me. What’s important is that we create genuine value for cancer patients.”

Learning to celebrate success
Singh, who is both Managing Director of Immatics Biotechnologies GmbH in Tübingen and CEO of Immatics US, Inc. in the United States, explains that the company having sites in both Germany and the US makes a lot of sense: “In the US, the mindset is that some companies will make it and others simply won’t. By its very nature, a venture involves risk. I love Germany and I was born here, but we often focus too much on the negative side of things – the possibility of failure. Although this is part of the German culture, we should copy the way Americans celebrate success. We can take huge pride in the fact that two of the three companies in the world to have mastered mRNA technology are located in Germany. That’s simply fantastic.” However, when it comes to assessing his own achievements, Singh uses much more unassuming language. “Modesty is an intrinsic part of the culture at Immatics and that, too, can be traced back to Prof. Rammensee. Despite all the accolades he has received over the decades, his feet have remained firmly on the ground. I’ve been really impressed by that.” Rammensee also played a major role in the discovery of mRNA and its potential uses. “That happened right next door here in Tübingen, on the very same floor.” Years later, this discovery would provide the foundations for developing the first SARS-CoV-2 vaccines. Due to a sense of conviction, Singh was one of the first volunteers to sign up for the CureVac trial. “It meant I didn’t have a vaccination status for a long time.” That’s long since been rectified, however, and he’s now travelling round the globe again after two years spent working from home. “Doing everything via Zoom really isn’t for me,” he says with a laugh. And has he ever regretted his decision in the Liquid Kelter bar in Tübingen? “No, never. Immatics is my life.” 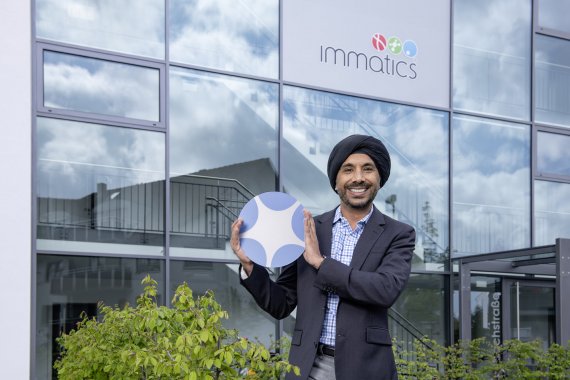 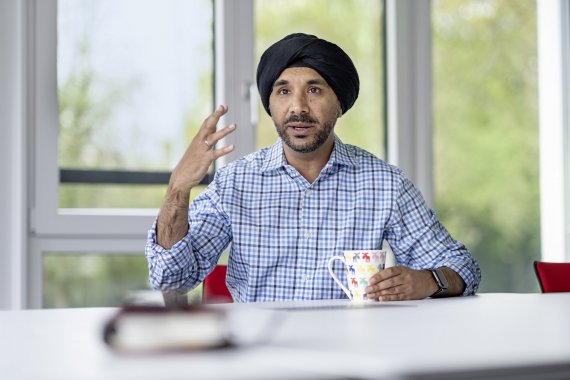 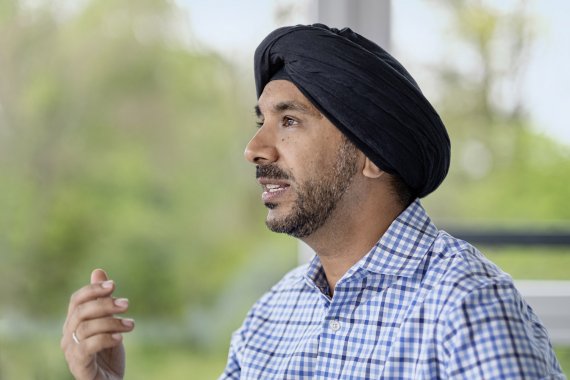 You can download the press release as a PDF here

When publishing, please ensure that the copyright information is correct