The start-up Rehago from Reutlingen has developed a cost-effective training system for hemiplegic stroke patients. Virtual reality games are to be used in addition to conventional ergotherapy and physiotherapy to help patients re-establish neural pathways and compensate for motor deficits. This simple-to-use system, comprising VR glasses, smartphone and controller, can be used in collaboration with a therapist in the patient′s home or soon in the clinic itself.

In most cases, strokes occur without any warning, and the effects pose major challenges to patients and their families. The sudden interruption of the brain′s blood supply causes certain functions of the central nervous system to fail, adversely affecting motor skills, among other things, and typically resulting in paralysis of one side of the body. Affecting an estimated 270,000 people every year in Germany alone, strokes are one of the leading causes of disability.

It has long been known that motor deficits can be successfully compensated for, or at least alleviated, if patients receive therapy at an early stage. For that reason, rehabilitation generally begins in the hospital or the rehabilitation clinic and is continued later on an outpatient basis, usually with the help of therapists visiting patients at home to oversee exercises. ‟From a medical standpoint, it would be advisable to train daily,‟ explains Philipp Zajac, CEO of Rehago. ‟But many patients can’t do their exercises without the guidance of a therapist, who, in many cases, can only visit the patient once a week.‟

This is where the start-up Rehago from the STERN BioRegion comes into play. The team of IT experts and game developers have created a platform offering games for a virtual training programme designed to support the therapy of stroke patients. They worked in consultation with an advisory board of therapists and medical professionals, including Prof. Peter Flachenecker, Chief Physician at the Quellenhof Neurological Rehabilitation Centre in Bad Wildbad: ‟We know from neuroscience that targeted rehabilitation can be used after a brain injury such as a stroke to re-establish neural circuits and activate affected regions of the brain or have other regions take over their functions. An entertaining training programme that encourages patients to carry out regular exercises can be very helpful in this regard.‟

This system can be used with input from a therapist in the patient′s home or – pending CE certification – in the clinic itself. All the patients need are VR glasses, which can display 3D images with the aid of a smartphone, and a handheld controller. A smartphone app provides access to a variety of games offering optimum support for the exercises targeting affected body parts. Rehago also makes use of mirror therapy, whereby patients ′move′ the paralysed side of their body with the help of a mirror. Zajac, whose master′s thesis dealt with the relationship between movement and the brain′s ability to process it, explains: ‟Although the patient isn′t using the paralysed hand to grab anything in the game, the glasses make it seem – and apparently feel – as though he were indeed using that hand.‟

The games are tailored precisely to the needs of the patients, who are typically older, which is why simple applications like ′Memory′ are available, as opposed to action-oriented ′shooter games′ or complex simulation games. ‟Patients are guided through a personalised and entertaining virtual environment in which it appears they can move their paralysed arm again. The visual feedback from the actions they carry out in the VR game causes neural pathways to be reorganised,‟ explains Zajac. Rehago does not see itself as a substitute for therapists – who are still needed to guide patients′ movements – but as additional support. Ergotherapists, with whom the company is already collaborating, have confirmed this: ‟The use of virtual reality in rehabilitation – with stroke patients, for example – offers great potential for supportive therapy,‟ says Zajac. ‟More than anything else, it motivates patients to train regularly on their own because, simply put, the VR glasses make training fun.‟

‟Rehago is a good example of how two originally unrelated sectors – medtech and computer games – can coalesce,‟ says BioRegio STERN′s Managing Director Dr. Klaus Eichenberg. ‟I′m convinced that the idea of a VR system with training games for hemiplegic patients won’t just impress healthcare professionals, but also has a lot of commercial potential.‟ The start-up will initially be moving into office containers at the Center for Entrepreneurship at Reutlingen University.

Before the company was even founded in August 2018, the team had already won Samsung′s ideas competition ′Life′s a Pitch 2018′, endowed with EUR 50,000, and the ′MFG BW goes MOBILE′ ideas competition for mobile solutions, which brought in another EUR 10,000. Zajac has a completely new sales platform in mind for Rehago′s future, which he believes will not only reduce rehabilitation costs, but will also open up entirely new markets for game developers. 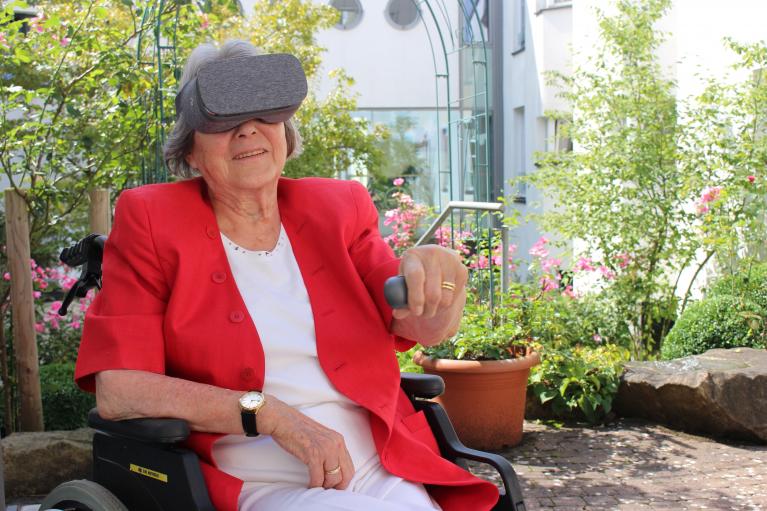 A 90-year-old from Tübingen is testing the new Rehago-system.