A nod to the future of surgery

“Incisions and Insights” on endoscopy and robotics in diagnostics and surgery

(Stuttgart / Tübingen) – The workshop series “Incisions and Insights – medtech engineers and medical practitioners live in dialogue” was continued in late June at the Institute of Clinical Anatomy of the University of Tübingen, where medical directors and senior consultants from various disciplines performed live operations on an anatomical specimen. They also discussed questions on the subject of “endoscopy and robotics in diagnostics and surgery”. 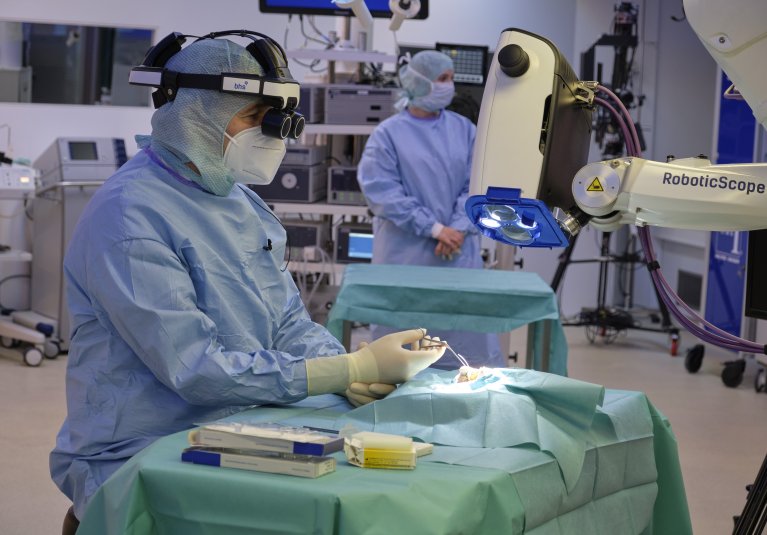 Prof. Löwenheim uses a head-mounted display to control a robotic arm with a camera head. 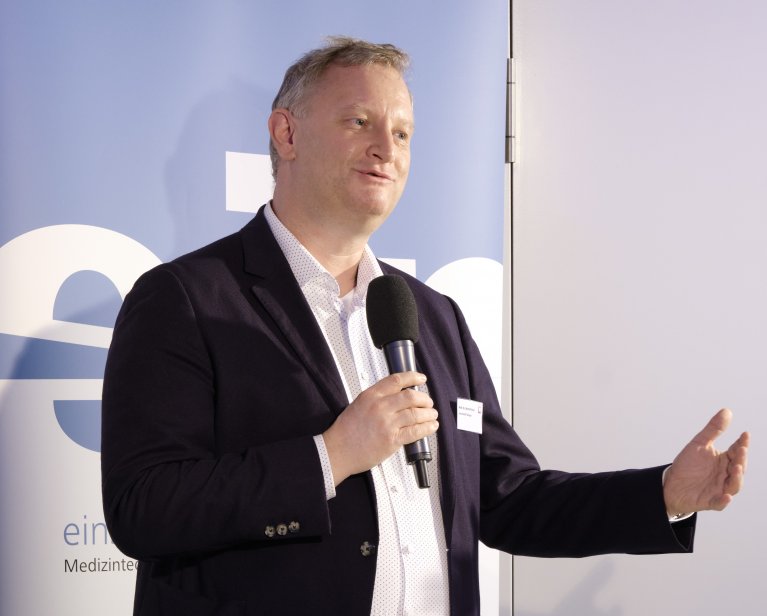 The participants were initially greeted by Prof. Bernd Pichler, Dean of the Faculty of Medicine of the Eberhard Karls University Tübingen: “Incisions and insights is a highly engaging event. As a format that combines medicine, technology and biology, it is guaranteed to be exciting.” Dr. Klaus Eichenberg, host and Managing Director of BioRegio STERN Management GmbH, was equally enthusiastic: “This is a format that is unlike any other in the world. It is a place where ideas for cutting-edge products and processes are born. If you need support with the implementation of your project, get in touch with us to discuss funding.” After a welcome address by Dr. Steffen Hüttner, Chairman of the Verein zur Förderung der Biotechnologie und Medizintechnik e. V., the host, Prof. Bernhard Hirt, Medical Director of the Institute of Clinical Anatomy and Cell Analysis, started the discussion, which was broadcast from the clinical anatomy operating theatre into the lecture hall, so that the participants could get directly involved. 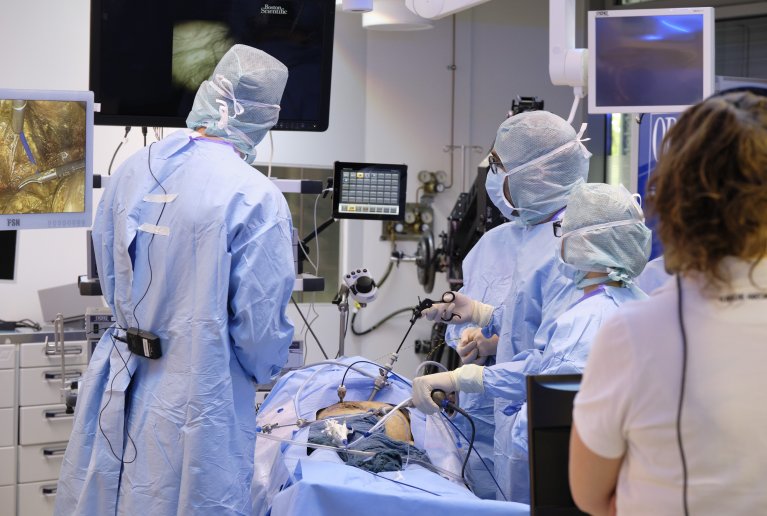 As complex as open surgery: Laparoscopy in combination with cholangioscopy.

The first operation went deep into the abdominal cavity. It was a laparoscopy combined with a cholangioscopy, which makes it possible to perform endoscopic examination on the smallest passages in the gastrointestinal tract, such as the bile duct. This procedure sparked an initial discussion about the advantages and disadvantages of single-use endoscopes. In urology, where very long channels are required, cleaning endoscopes is often a difficult task. “Cleaning is no trivial matter,” says Prof. Stenzl. Roughly one in every eight devices is rendered defective after cleaning. This is a common problem with the fibre optics, for example. That is why the clinic is currently investigating the true environmental impact of opting for single-use devices, compared to cleaning reusable devices. The imaging provided by single-use endoscopes is considered to be inferior, and their size makes them more awkward to handle. That said, some argue that endoscopes should not be expected to do everything, for instance take care of diagnostics and treatment at the same time. Often, the doctor wants to “just take a look at things first”. To the astonishment of the medtech engineers, some users do not want one device with numerous functions, but rather highly specialised devices tailored to specific applications. It is believed that, if they were equipped with appropriate single-use elements, these devices would not be as expensive either. The doctors explained that performing an endoscopy with high-end equipment in tandem with a biopsy, for example, can be just as complex as open surgery. During the live operation, it became clear just how sensitive these devices are. The surgeons discovered a hole in the flexible part of the wafer-thin cholangioscopic endoscope and had to replace the wire. “It is precisely this level of authenticity that makes Incisions and Insights so extraordinary,” explains Prof. Hirt. “We don’t show perfection – we show what actually happens and what could be done better.” 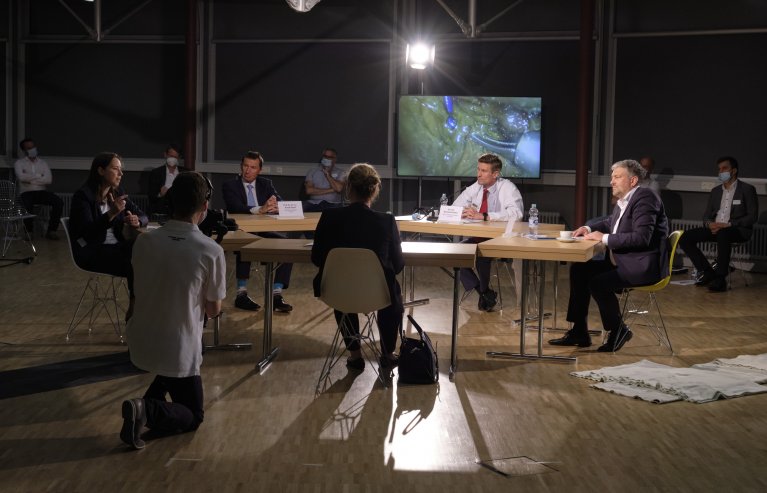 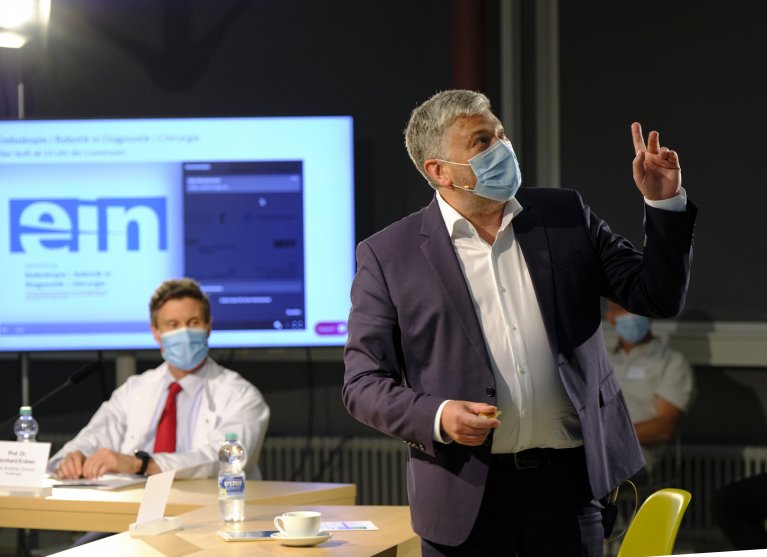 The surgeons described the second procedure as “routine with complications”. This is because, during a nasal endoscopy, it is possible to access the base of the skull, even right through to the spinal column. During these procedures, it is very important to collaborate with neurosurgeons, because the base of the skull is so thin at the dome of the nasal cavity that there is a risk of causing damage. The surgeons demonstrated this on the anatomical specimen, while also illustrating why there is a desire for endoscopes to be even smaller for this application. In the discussion that followed, the participating medtech engineers noted that doctors’ wishes are not always easy to put into practice: “The devices should be small and long enough to go anywhere, but easy to use – ideally by just one person. They should be rigid enough to pass through narrow spaces more easily, but at the same time flexible enough to cope with bends. On top of that, these should be high-end devices that are only used once.” Another discussion arose on the subject of the material required to close lesions in the base of the skull, for example. This poses a particular challenge, as the lesion has to be sealed transnasally, which means dealing with secreted fluids. Identified as a medical need, a substance is required here that can be poured into the appropriate area and will bond to the edges. This was one of several discussions that left the doctors feeling hopeful, as Prof. Schenke-Layland was able report that research in this field was making great strides.

A nod to the future

Finally, the demonstration by Prof. Löwenheim attracted a great deal of attention. He used a head-mounted display (HDM), a type of video headset, to operate a robot arm with a camera head. This enabled him to control the 3D microscope just by moving his head, leaving his hands free to perform surgical procedures, such as placing fine electrodes for a cochlear implant. This glimpse into the future of surgery prompted further hopeful speculation. Some surgeons expressed a desire for the microscope display to also provide them with data on the nature of cells or to alert them to the presence of nerve pathways. As one participant explained, this field is ultimately undergoing a development similar to that of the automobile, but it is still a long way from fully autonomous driving or, rather, surgery.

Save the date! The next “Incisions and Insights”:

When publishing, please ensure that the copyright is correctly stated.