An international team from Germany, France and the US has been awarded one of the prestigious and highly competitive Synergy Grants of the European Research Council (ERC). The PATHOCOM project, funded with 10 million Euros over six years, aims to discover how pathogens team up to cause disease. The team is led by Detlef Weigel from the Max Planck Institute for Developmental Biology in Tübingen, Fabrice Roux from CNRS in Toulouse and Joy Bergelson from the University of Chicago. 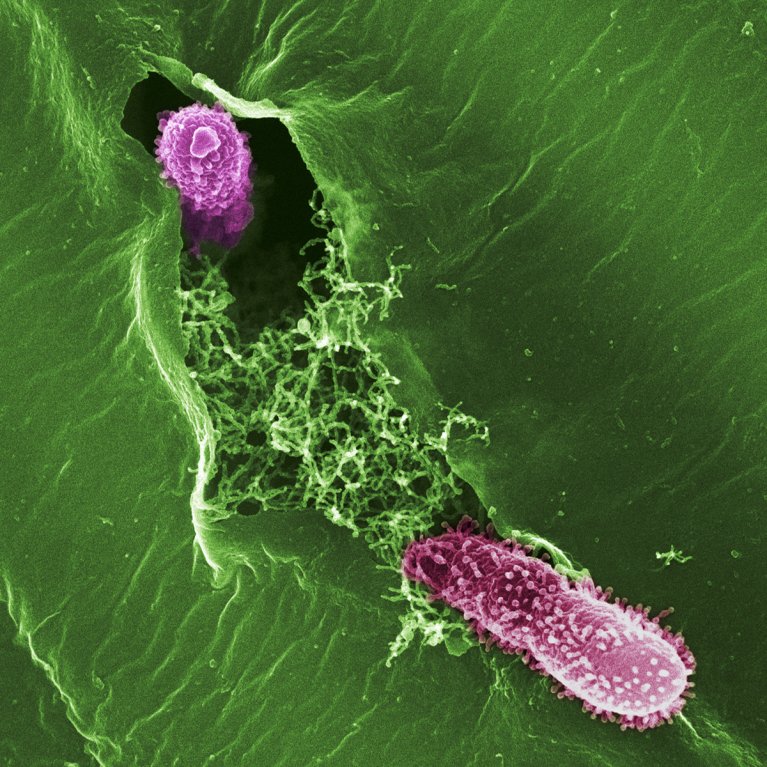 Everybody knows that pathogens are the cause of many serious diseases in plants, animals and humans, but what is less widely known is that pathogens rarely act on their own. As one example, the majority of deaths during the 1918/1919 flu pandemic were not caused by the influenza virus, but rather by complications from bacterial pneumonia. How pathogens interact to displace other, harmless microbes and in consequence injure or even kill their hosts is thus a question with broad relevance in many systems.

The goal of the PATHOCOM project is to discover how frequent different types of interactions between microbes, especially cooperation and competition, are in complex microbial communities, and how ecology and genetics alter these interactions. In other words, what are the key drivers of pathogens success, and how do pathogens interact with each other and the environment within their host? Similar to what happens in a massive marathon race with different teams and individual competitors, PATHOCOM aims to learn who among the pathogens competes with whom, and who among them is teaming up with whom to win.

These questions will be addressed using the plant Arabidopsis thaliana and its microbial pathogens. The transatlantic PATHOCOM team will infect plants with almost two hundred thousand different combinations of pathogenic and non-pathogenic bacterial strains, and measure who is helped by co-infection and who is not. In parallel, thousands of plants from natural sites in the US, France and Germany will be studied, to learn how the patterns discovered in the lab compare to real world data. The connection between the two lines of research will come from sophisticated mathematical models that allow the prediction of complex microbial communities starting from knowledge of interactions tested in the lab.

The experimental hurdles are daunting, since already 300 different bacterial strains can in principle assemble into more combinations than there are atoms in the universe. The key to meeting this challenge lies in innovative CRISPR-Cas9 based methods to “barcode” both bacteria and plants, which allows for ultra-high throughput analysis of infection trials.

Importantly, the PATHOCOM scientists will not only perform experiments under artificial lab conditions, but will also carry out field trials with genetically modified plants and bacteria. Because current regulations make it next to impossible to conduct such studies in Europe, these experiments under real-world environments will be carried out in the US at a dedicated site of the University of Chicago.

“In a year like this, it’s unnecessary to stress the importance of understanding what allows pathogens to damage their hosts. There are many factors that determine pathogen success, but an essential factor is often the presence of other pathogens. We must understand what determines the success of pathogens in complex microbial communities, if we want to develop new interventions to control them,” says Detlef Weigel, corresponding Principal Investigator for this grant.

His colleague Joy Bergelson adds that “The discovery of key ecological and genetic drivers of pathogen success will be a first step to help transform plant-pathogen studies into a predictive science that can be applied to other pathogens and hosts.”

“Such knowledge can in turn become the foundation for developing radically new ways of preventing pathogens from taking over microbial communities and causing disease, with the ambitious future goal of developing personalized agriculture,” concludes team member Fabrice Roux.

ERC grants are generally considered as the crown jewel of competitive funding for academic research in Europe, and the Synergy grants stand at the top of the ERC hierarchy, with fewer than 40 grants each year given for all disciplines, from humanities to natural sciences. The ERC Synergy grant scheme supports complex projects by outstanding research leaders, who join forces as an extended team of excellence, combining their knowledge, resources and expertise. A team consists of two to four Principal Investigators, with the option of one institute coming from outside the EU.

This is the second ERC grant for Detlef Weigel, who is also an outspoken advocate for science-based assessment of genetic modification and genome editing. His department at the MPI and scientists trained in his department account for approximately 5% of all ERC grants awarded for plant science projects since 2007, an unparalleled achievement in any discipline.