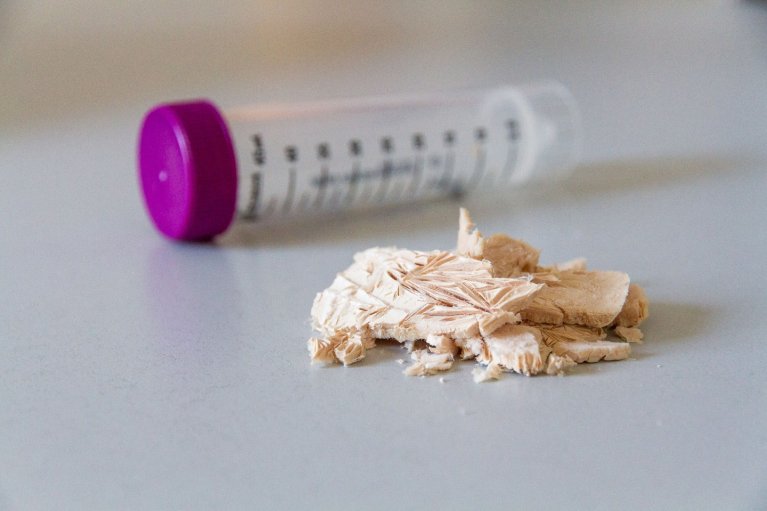 Germany generates around 38 kilograms of plastic waste per capita each year. In a joint project with the University of Stuttgart and LCS Life Cycle Simulation, researchers from the Fraunhofer Institute for Interfacial Engineering and Biotechnology IGB and the Fraunhofer Institute for Process Engineering and Packaging IVV are now working to establish a holistic concept for the sustainable use of biologically degradable packaging materials in the cosmetics industry. The project is focusing on polyhydroxyalkanoates (PHAs), which have similar properties to conventional plastics but are produced from microorganisms and without the use of fossil-based raw materials.

To date, the bacteria in Dr. Susanne Zibek’s lab at Fraunhofer IGB in Stuttgart have been fed on a whole variety of waste materials, ranging from wood waste and oil and sugar residues to glycerol from biodiesel production. Each of these carbon-based feed sources causes the bacteria to produce specific intracellular storage granules. These so‑called polyhydroxyalkanoates (PHAs) are the focus of SusPackaging, a research project that is being conducted in cooperation with Fraunhofer IVV in Freising, the University of Stuttgart and LCS Life Cycle Simulation, which is located in the town of Backnang. Researchers from Fraunhofer IGB are seeking to create biologically based, biodegradable polymers as a replacement for plastic packaging in the cosmetics industry. What sets the project apart is its attempt to establish a wholly green value chain. As Dr. Ana Lucía Vásquez‑Caicedo from Fraunhofer IGB explains, a holistic concept with a focus on sustainability is new: “A lot of studies concentrate on individual aspects, but it’s rare to see a consideration of the entire process chain all the way up to an evaluation of the quality of materials.” 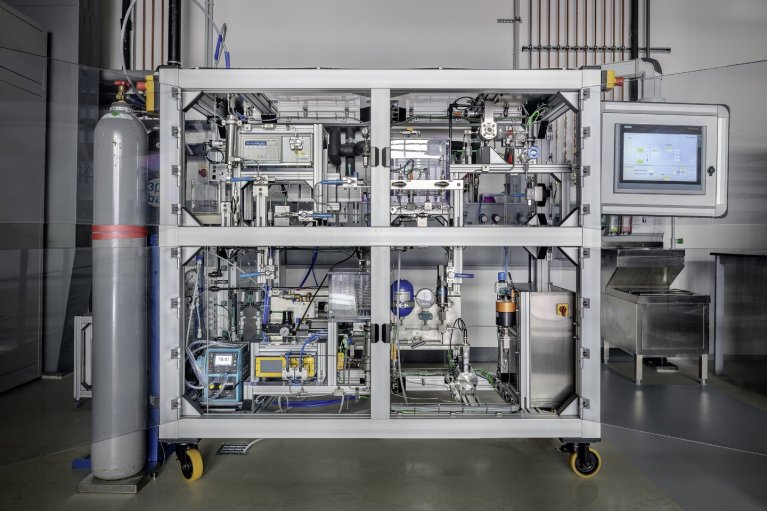 Lab equipment for cell disruption and extraction of functional materials at Fraunhofer IGB.

The process begins with cultivation of the bacteria. Dr. Susanne Zibek, group manager of the Food Processing Technology Group, and her colleague Dr. Thomas Hahn are investigating how specific microorganisms can be used to produce different PHAs with different structures, and how the choice of feed influences their characteristics. “Basically, we’re trying to create new structural variants, so that we can then see whether the polymer produced is suitable as a packaging material,” Dr. Susanne Zibek explains. The working group has support from researchers at the University of Stuttgart, who are taking a closer look at various characteristics of the microorganisms, including the extent to which they can adapt to toxic substances that might be contained in the natural feed sources.

Before the PHAs can be processed and tested, they must first be extracted from the microorganisms. This is the specialist field of Dr. Ana Lucía Vásquez‑Caicedo, group manager of the Food Processing Technology Group at Fraunhofer IGB. As a rule, this so‑called purification process uses solvents such as chloroform. However, as she explains, the aim is to move away from environmentally harmful solvents. Instead, she has developed a purely mechanical/physical method of cell disruption. Known as pressure change technology (PCT), this involves the addition of a process gas to the fermentation broth containing the microorganisms. The broth is then pressurized, with the result that the gas penetrates the cytoplasm of the cells. A rapid lowering of pressure in the broth destroys the cells and releases the PHA.

Following purification, the PHA is sent in the form of a white powder to Fraunhofer IVV in Freising. Here, it is turned first into granules and then into a polymer film. Initial testing on small sheets of this polymer has examined material characteristics such as thermal stability, plasticity and various barrier properties – essential if future packaging is to provide cosmetic ingredients with, for example, effective protection against desiccation.

Dr. Cornelia Stramm from Fraunhofer IVV is happy with the results so far: “In terms of their mechanical properties, some PHA types are still proving somewhat difficult to process. We need to make a few adjustments there. But in terms of their barrier properties, PHAs show great potential compared to other biopolymers.” At the end of each testing cycle, she sends the results back to Stuttgart along with recommendations for further action, and then the process begins again.

Based on this feedback from Fraunhofer IVV, Dr. Susanne Zibek’s working group at Fraunhofer IGB has modified its feed strategy. The bacteria are now given an additional cosubstrate, which increases the PHA’s valerate content, thereby making the end product more pliable.

Further enhancement with every feedback loop

While volumes are still very low and production takes a lot of time, the process is steadily improving with each feedback loop.

Once the various steps have been finalized, a life cycle analysis conducted by external project partner LCS Life Cycle Simulation will evaluate the energy efficiency and sustainability of the entire process in order to compare it with existing processes. All three researchers from Fraunhofer see big potential for PHAs. In the future, particularly for small items of disposable packaging, they could offer a genuine alternative to conventional petroleum‑based plastics.