The Science2Start awards ceremony held as part of the BioRegio STERN summer reception 2017 at the Tübingen-Reutlingen Technology Park recognised scientists and company founders from BioRegion STERN for the ninth time. This year’s winner whose idea was deemed to offer the greatest economic potential is a start-up company from Tübingen: Mireca Medicines GmbH is conducting research into a drug to treat certain incurable eye diseases. Second place went to a team from NMI, which is developing a portable thermoelectric cooling bandage. Third place was shared by the University Hospital of Tübingen with its mobile sensor system for epilepsy patients and the University of Hohenheim with its silo monitoring system.

The winners of the 2017 “Science2Start” ideas competition were presented at this year’s joint summer reception hosted by BioRegio STERN Management GmbH, Verein zur Förderung der Biotechnologie und Medizintechnik e. V., and the Tübingen-Reutlingen Technology Park last Thursday. In his keynote speech, Dr. Karsten Henco, co-founder of biotech firms Qiagen and Evotec, spoke about the challenges of successfully establishing a company in Germany. “If we have set ourselves ambitious targets, we should be aware that in Germany it will probably only be possible to achieve them by unconventional means. There is generally no manual for success.” Despite a lack of instructions on how to found a successful company, Dr. Henco was able to draw on his own experiences and give the numerous founders and young entrepreneurs present a number of important tips: “Success will likely be achieved by courageously seizing opportunities that arise as your company develops. A successful breakthrough will often start out masquerading as a devastating failure.” In a warning tone, he added: “Be aware that young companies tend to fail because of the way they are managed, not because their technology doesn’t work.”

The four winners of the 2017 Science2Start ideas competition

Prof. François Paquet-Durand of the Research Institute for Ophthalmology of the University Hospital of Tübingen Mireca Medicines is conducting research into a drug to treat certain forms of hereditary retinal diseases for which there is as yet no cure. Under the aegis of Prof. Paquet-Durand, DRUGSFORD, the EU consortium behind the company, identified a therapeutic substance formulation which can overcome the blood-retina barrier and inhibit overactivation of the cellular messenger substance which is responsible for the death of the photoreceptors in the eye. This could halt the loss of eyesight for patients with certain forms of hereditary retinal degeneration.

Britta Hagmeyer, Simon Werner, Gorden Link and Dr. Martin Stelzle, NMI Natural and Medical Sciences Institute at the University of Tübingen MOLLICool is a portable thermoelectric cooling bandage. It enables simple, immediate, long-lasting and evenly applied cold therapy with physiologically optimum temperature adjustment. Patients can use the mobile cooling bandage easily at home or on their travels after accidents, sports injuries or even during chemotherapy in order to alleviate pain and prevent tissue and nerve damage.

Third place to monikit – the “helping hand” for people with epilepsy:

Kevin Klett, Florian Lutz and Julian Hofmeister from the Department of Neurology at the University Hospital of Tübingen monikit is a mobile sensor system which can be worn as a chest patch or wrist-band. It is designed to identify epileptic attacks in daily life and transmit relevant information to doctors, family or friends. The monitoring system is able to recognise and document both major epileptic seizures and those that are less serious. Thus, as well as acting as a safety system, it also opens up more targeted treatment options.

Third place to SiloSense – the digitalisation of agricultural stores:

Simon Munder, Oliver Bumann, Thomas Bauer, Institute of Agricultural Engineering at the University of Hohenheim SiloSense is a networked system for the precise monitoring and control of storage atmospheres in silos. Vast quantities of grain are regularly ruined across the globe due to a lack of reliable information from warehouse interiors. This system records parameters such as temperature, water activity and CO2 content and uses scientifically based models to draw precise conclusions about the condition of the stored goods. Linking the system to automated learning processes enables it to make individual recommendations for action and to forecast the optimum timing of sales.

The winners of this year’s Science2Start competition again received prizes worth a total of 4,500 euros, which were once again sponsored by VOELKER & Partner, a firm of lawyers, tax consultants and auditors. At the ensuing summer reception hosted by BioRegio STERN Management GmbH, the numerous guests from re-search, industry and politics engaged in lively conversations until late evening. Host and BioRegio STERN Managing Director Dr. Klaus Eichenberg commented: “I am certain that along with their prize monies, the four prizewinners will this evening also take with them valuable experiences and contacts. And that is precisely the aim of our ideas competition.” 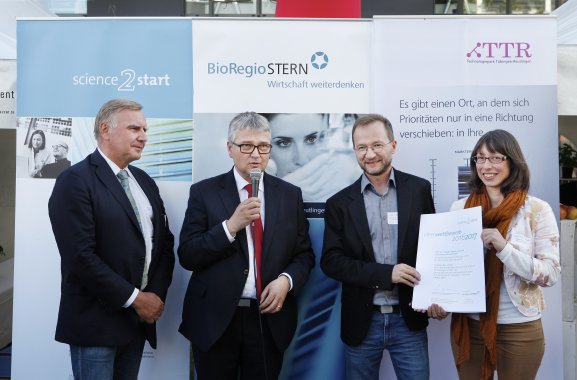 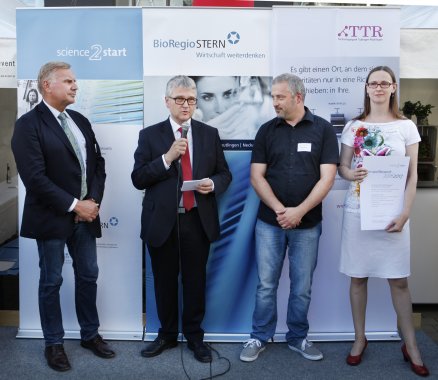 2. Place to the cooling bandage MOLLICool. 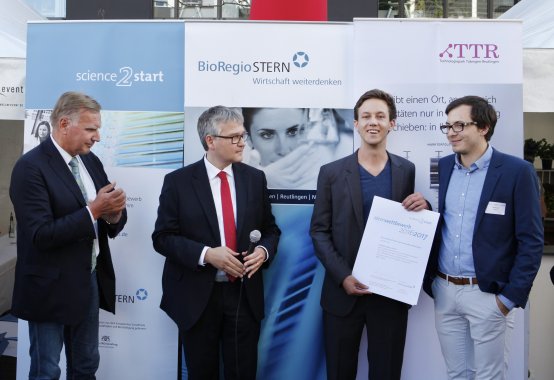 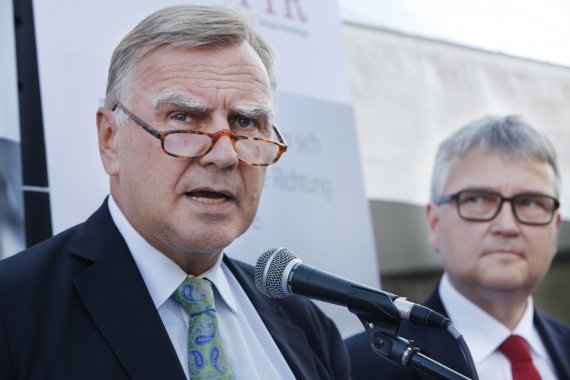 Dr. Karsten Henco about the challenges of successfully establishing a company in Germany. 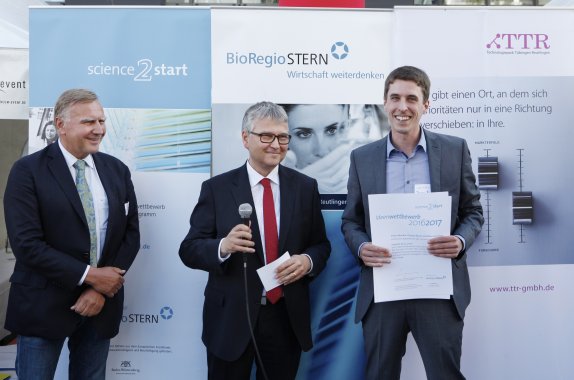 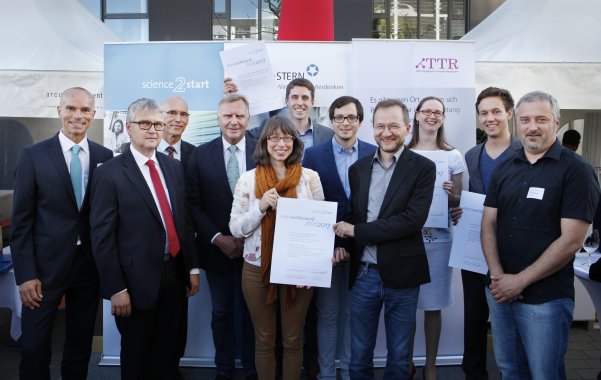 The winners and speakers of this year's Science2Start-Ideas competition. 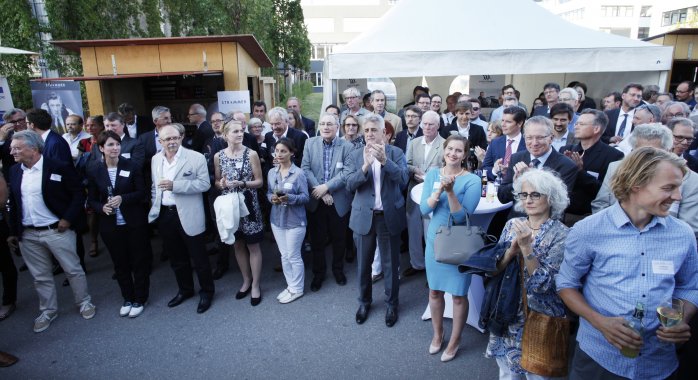 The summer reception 2017 took place at the Tübingen-Reutlingen Technology Park.